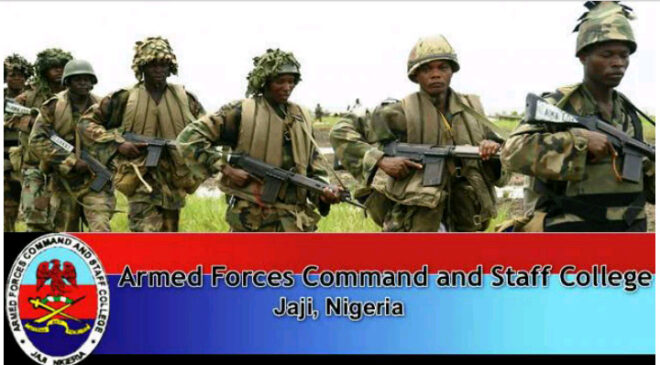 A statement issued on Thursday in Kaduna by the college Public Relations Officer, Maj. Ajemasu Jingina said the training, code-named “Exercise Ubiak-Isin”, was for participants of Junior Course 93.

According to him, the exercise will hold along the Jaji-Labar-Dunki-Bina-Wazata general area in the Igabi Local Government Area of the state.

He explained that it was designed to assess the student officers on various aspects of leadership, tactics, command and control in all phases of conventional and asymmetric warfare.

He said that as part of the event, the AFCSC would distribute welfare materials to residents of Bina and Tudun Amada villages, to enhance the existing cordial relationship between it and its host communities.

“The general public, especially people living around the exercise area, are advised to remain calm and not panic on sighting movement of troops and military equipment.

“Sounds of explosives and small arms fire would also be heard intermittently during the days of the training exercise,” the spokesman said.

He assured that necessary preventive measures had been put in place for the security and safety of the area, but advised the general public to keep off the vicinity during the military exercise.