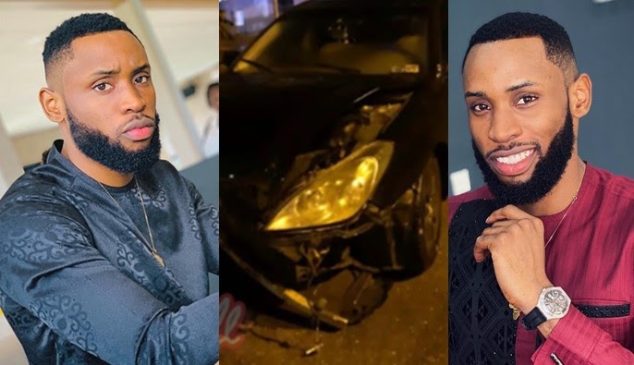 Big Brother Naija ‘Shine ya eyes’ housemate, Emmanuel Umoh on Monday was involved in a ghastly auto crash. The incident is coming less than a week after his colleague, Patrick Fakoya, better known as Rico Swavey died.

The reality star thankfully survived the accident and took to his Snapchat page to share a photo of the damaged car, while thanking God for sparing his life.

He claimed that the experience rendered him emotional as he could not control his tears and appreciation for God.

Umoh further went on to disclose that this wasn’t the first accident he had been involved in, stating he also had an accident with his first car in 2019, days after his birthday.

He wrote, “Thank God for life, been a while since I cried, I think life got me too hardened.”

He further added saying, “Nope I didn’t get hurt, and it hurt for days…”