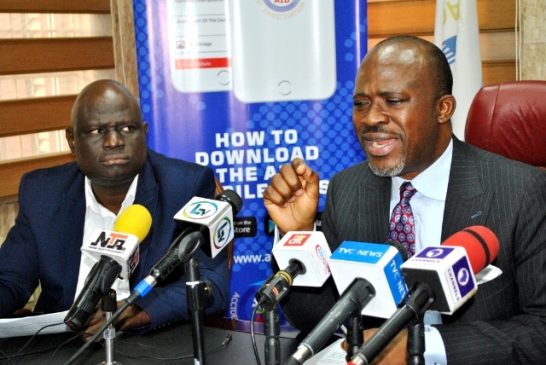 * From right: The Commissioner /Chief Executive Officer of AIB, Nigeria, Engr. Akin Olateru and General Manager, Public Affairs, Mr. Tunji Oketunbi during the briefing on the latest on Quorom Aviation helicopter that crashed on August 28, 2020, at Opebi, Lagos

This is just as he informed that the aircraft wreckage has been recovered and in the custody of the Bureau.

He made these known while briefing Aviation Correspondents on the latest on the crashed chopper.

“An FDR on the aircraft would have aided the investigation but, nevertheless, our world-class trained investigators are competent to retrieve information about a crash from the wreckage and several other components of the aircraft, the site of the crash, communication with the ATC, and other documents on the aircraft and the crew.

“We would like to point out that investigations are currently ongoing and conjecture at this stage is detrimental to the process. As a point to note, Accident Investigation is in phases and all procedures are performed in accordance with the Civil Aviation (Investigation of Air Accidents and Incidents) Regulations 2019 and the guidance of ICAO Annex 13. At this instance and in line with the phases of accident investigation processes, we are at the stage of evidence gathering,” he said.

Speaking further, Olateru said, “We would like to clarify that AIB did not retrieve an FDR from the aircraft as the Bell 206 is certified at approximately 1,519kg (3,350lbs) and featured five seats. It does not meet the necessary criteria for an FDR and was not featured with one.

“The standard requirement for an FDR in any aircraft is ten seats.

“It is extremely important to note that the Aviation Industry is the most regulated industry globally and its operations are regulated in accordance with the International Civil Aviation Organization (ICAO),” Olateru said.

The AIB boss explained that the FDR would assist in getting evidence for AIB investigation, adding that since the helicopter does not have the instrument there are other instruments that could assist AIB in its investigation.

On the validity of CoA and AOC, Olateru said that the former is valid till October 29, 2020, and the later would be valid till November 2020.

According to him, “From the evidence gathered to date, the helicopter has a valid Certificate of Airworthiness (C of A) till October 29, 2020, and Quorum Aviation has a valid Air Operator’s Certificate (AOC) that will expire November 20, 2020.”

On the insinuation that the pilot jettisoned fuel, a situation which some claimed prevented the aircraft from exploding, the AIB Commissioner explained that the aircraft does not have the capacity to jettison fuel.

On when Nigerians should expect the preliminary report, he said it would be ready in four weeks

Meanwhile, the AIB boss stated that the accident investigation body would partner with the Lagos State Emergency Management Agency (LASEMA), a collaboration that will include  training officials of the Lagos State outfit

“In view of the role LASEMA played at the Bell 206-B3 crash site, AIB is looking at securing collaboration with the agency as a way of further strengthening the security at crash sites and of vital evidence that could aid our investigations,” he said.

He appealed to the media and the public not to engage in conjecture, as according to him is detrimental to AIB’s investigation.

He expressed AIB’s heartfelt condolences to the family and friends of the victims of the air accident and mourned the loss of colleagues. Ablenewsng.