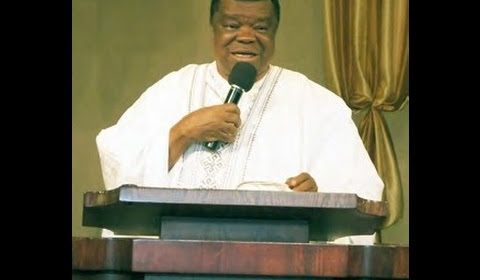 For many years, I heard about the famed Christian preacher, Uma Ukpai. Finally, I was opportune to see him and listen to him. It was at Pastor Josh Umechuruba’s church in Lanham, Maryland (just outside of Washington, DC). His audience was Nigerian with a fair sprinkling of other Africans and Black Americans. Throughout his preaching, he did not mention repentance, salvation or godliness. He dwelt, exclusively, on prosperity: riches, luxury cars and mansions. According to him, wealth will accrue to you, if you sow (donate money) into the church and lives of pastors. He gave series of examples of people who became wealthy just by giving to pastors and churches, including his sowing his jeep, and on getting home, there were three new jeeps (gifts from people) awaiting him. That is, from sowing the seed of one jeep, he harvested three jeeps.

I was very surprised and totally dismayed by this deviation from the central motif of Christianity. Jesus Christ came to reconcile us unto God, not to make us rich. Christianity is about repentance, salvation and eternal life. The early Christians were called Christians because they were distinguished by their Christ-like manners and temperament, not by their wealth and worldly possessions. They separated themselves from the idolatry (worship of false gods and materialism) that pervaded the city of Antioch. As the light of the world, they shone before men and men saw their good works.

At the end of his message, an African-American lady asked him where he got this fixation on wealth and prosperity from; because it is not biblical. To her question, Uma Ukpai rambled and gave no definite or convincing answer. He could not give a convincing answer, supported by bible verses, because there is really no genuine biblical foundation for prosperity doctrine – sowing seed and getting rich. Prosperity doctrine is falsehood; a perversion of the Gospel of Jesus Christ.

READ  I will consider It demoting If Invited To Be Nigerian President, I belong To Above All Nations- Says Oyedepo

After, supposedly, having convinced his audience that emptying their pockets into the offering box will make them rich, he called for donations. The donations were unimpressive because, unlike their compatriots in Nigerian, the Nigerians in America are not yet sold on prosperity doctrine, and it makes no sense to Black Americans Secondly, the American society is not corrupt; people labor for their money. Therefore, they are not privileged to financial windfalls (from bribes and theft of public funds) that can be thrown carelessly at pastors and hauled into the church coffers. Again, the American society is not wealth conscious. So, nobody donates his money to impress it on others that he is rich.

In prosperity doctrine, pastors avoid the core of the gospel and dwell on the periphery. It can only make sense in a greedy and wealth obsessed people, like Nigeria, with their corrupt, might-is-right and get-rich-quick-by-all-means mentality. Soldiers are trained to kill or be killed. Therefore, subliminally, they live today as though they are dying tomorrow. Those who live with little care for tomorrow must be hedonic and financially reckless. Quite naturally, they saw no higher purpose of power than self-gratification and self-enrichment. It was the perilous mix of oil windfall and self-seeking military rulers that taught Nigerians that hard work, honesty and commitment to duty do not pay. And that money should be made not from hard work but corruption, fraud and outright stealing of public funds, and that theft and corruption are not punished but extolled and rewarded.

As it is no longer work and resourcefulness that determined income, but connections, disregard for the law, and even dalliance with satanic forces, we developed an affinity for unmerited money and reaping where we have not sown. Free money and all other sorts of undeserved riches that the Nigerian society frowned upon in the past became acceptable because we could no longer conceive of achievement, success or fulfillment except as measured by the possession of money. Lamentably, this societal mindset has profoundly influenced Christian doctrine in Nigeria. To pander to their own voracity and to make Christianity relevant to the grasping avarice and wealth consciousness of the Nigerian society, pastors took to preaching prosperity.

Jesus Christ (as in Luke 18: 24 &25, Mark 4:19) preached against excessive concern with the riches of this world. However, he realized our need for money and other earthly things that make life comfortable. And he expects us to have them. But he made a distinction between the wealth acquisition of a believer and that of an unbeliever. In Matthew 6: 33, he said, “Seek you first the kingdom of God, and his righteousness: and all these things (wealth, mansion, fancy cars, good health, etc) shall be added unto you”. Which is strikingly similar to God’s earlier instruction to Joshua, in Joshua 1: 8, “The (word of God) shall not depart from thy mouth; but thou shall mediate therein day and night, that thou may observe to do according to all that is written therein: for then thou shall make thy way prosperous, and then thou shall have good success”.

The prosperity of Christians, as opposed to that of the unbelievers (the lawless, murderous, etc) is conditional, contingent on their having sought the kingdom of God and his righteousness, which is synonymous with meditating on the word of God and observing to live according to it. Prosperity and success are corollaries to Christianity. They are blessings that will naturally be associated with the life of a true Christian. The problem with prosperity doctrine is that it turns the Gospel of Jesus Christ up side down by dwelling on prosperity, which is a sequel to Christianity, and ignoring the crux of Christianity, which is being Christ-like.