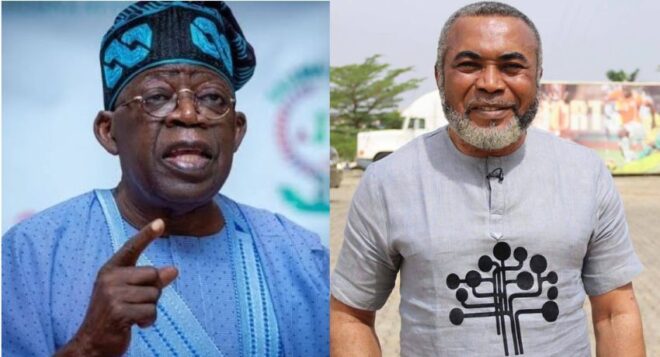 “I know that when he becomes the president of this country, he will turn the economy around for the better.”

Zack Orji is the latest Nigerian celebrity and actor to publicly declare his support for the candidacy of the All Progressives Congress presidential flag bearer, Bola Tinubu.

In a two-minute clip posted on social media, Mr. Orji, vice president of the Ambassadors for Voice for Change, said his support for Mr. Tinubu is both experiential and personal.

The actor said that having lived in Lagos for over 40 years, he knows that Mr. Tinubu is a chief crusader for the consolidation of democracy in Nigeria.

He said: “I have always known him as a man who stands for equity, justice, fair play and national cohesion.

“In his time as governor of Lagos state, he ran an all-inclusive government drawing people from different ethnic extractions into the executive council as decision makers to run the affairs of the state.

“People who came from different ethnic extractions were allowed to be part of the decision-making of Lagos State. I know with a high degree of certainty that on a national scale when he becomes the president of Nigeria, he will do likewise.

“This is what we need in this country. Though we differ in tribe and tongue, charity and brotherhood, we stand tall and proud.

“I know that when he becomes the president of this country, he will turn the economy around for the better.”

On June 8, Mr. Tinubu defeated other aspirants, including the Vice President, Yemi Osinbajo, Rochas Okorocha, and Rotimi Amaechi, among others, to emerge as the presidential candidate of the APC.

About a month after his victory in the primaries, Mr. Tinubu stirred controversy when he picked a governor of Borno State, Kashim Shettima, a Northern Muslim, as his running mate.

This started a debate on whether a Muslim-Muslim ticket is good for the country at this time.

As a fallout of his choice of a running mate, veteran Nigerian actor Kenneth Okonkwo resigned his All Progressives Congress (APC) membership.

Citing equity, justice, fairness and peaceful co-existence among Nigerians, Okonkwo stated that APC’s Muslim-Muslim ticket would permanently destroy the political viability of Christians in the north of Nigeria if allowed to stand.

Meanwhile, some Yoruba actors have endorsed the All Progressive Congress presidential candidate, Tinubu.

In a viral video posted on social media in July, some Yoruba movie stars declared support for the former governor of Lagos State.