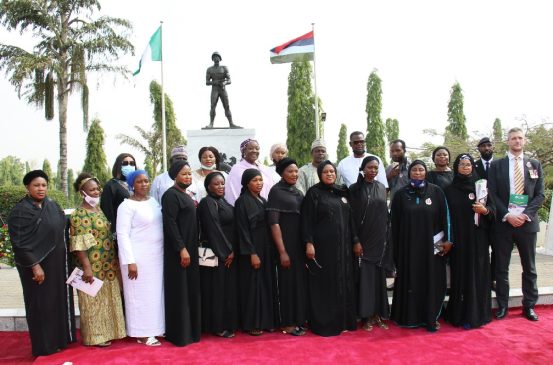 It was all tales of sorrow, anguish, and pain from widows of fallen heroes, as the country marked the 2023 Armed Forces Remembrance Day  across the nation last Sunday,

The affected, mostly wives of soldiers and policemen, who lost their lives in active service lamented the nonpayment of their late husbands’ life insurance benefits.

The women, obviously bearing scars of deprivation and abandonment, demanded prompt intervention in the payment of their late husbands’ life insurance benefits and other entitlements.

This year’s event showcased governments at the state and federal levels restating their commitment and support for the military who strive to maintain the peace in the country.

The event, which should be a time to celebrate the departed soldiers for their sacrifice to the country, may have taken a different twist as the widows in a separate interview with The PUNCH painted gloomy pictures of the challenges they have faced since their husbands died in active service.

They specifically expressed reservations over the non-payment of the life insurance of their late spouses.

While they confirmed that their entitlements had been paid, the widows maintained that the Federal Government kept making blank promises regarding the life insurance payment.

Some of the widows, whose husbands died while fighting Boko Haram terrorists at the height of the insurgency in the north-east, said the entitlement was a meager amount compared to the unpaid life insurance.

One of the widows of the deceased military officers, Nkechi Nkem-Onyeasor, said she had been neglected by the government since 2014 when her husband died.

She lamented, “They have not even paid me his entitlement not to talk of rendering financial assistance. Let them first pay me the entitlement.”

On how she has been coping since her husband’s passing, she said, “I just finished talking with my son and he told me that I’m losing weight. He said I should check my weight on a scale because he now looks weightier than me. In pain, I retorted that he knows nothing about what I was going through.

“Since schools resumed, I’ve been begging people to help me, even on my various social media handle, so that my children can return to school. I’m yet to complete their last term tuition payment, now, I’m faced with another for this term, as schools have resumed since last week.

“I’ve been ejected from the barracks, so I now have to pay house rent from the proceeds of begging people. The only thing left for me to do is to go with a plate from house to house or stand by the roadside to beg fir alms from spirited Nigerians,” she bemoaned.

The mother of four said she lost her husband on August 7, 2014, at the battlefield while fighting terrorists in Maiduguri, in the North-East.

“He died August 7, 2014, in North-East Nigeria, Maiduguri precisely. He died on the war front following an attack by Boko Haram,” the widow disclosed.

Narrating her efforts at getting her late husband’s entitlement, Nkem-Onyeasor said, “I’ve gone to army headquarters where I usually go, but they said that it’s Defence Ministry that is in charge of insurance.

“I learned the Insurance section is in charge of the bulk of the money which is supposed to be paid. My husband died as a captain. The money they gave me as a death benefit could not even buy land in Enugu not to talk of mounting a building. It’s the insurance that we have been waiting for since 2014 till today, which is nine years, but each time I go, nobody gives me any reasonable answer. I know someone that has been paid. Perhaps, she had somebody on the inside, who fast-tracked the process for her. They paid her in 2017 when they had not paid those of whose incident happened in 2014. From what I’ve heard, they are yet to pay anyone from 2014. So, where is the money?”

Nkem-Onyeasor complained bitterly that the association to which widows of deceased military officers belong has not been helpful at all.

According to her, “There’s an association for military widows and I’m a member. The association is not doing anything, as far as I’m concerned. When we gathered to stage a protest, the association urged us to calm down and told us to forward our names. For the past three years, we have been doing that – forwarding and forwarding our late husband’s details, but no one has called me for any interview or told me that my processing details failed. So, I don’t think the association is doing anything reasonable.”

On her part, Mrs. Cynthia Dalaky, who also lost her husband on the battlefield in 2013, disclosed that though her entitlement has been paid, “the process to get it was enough to discourage widows from pursuing such.”

She said, “Fortunately for me, I’ve been paid my late husband’s entitlement, but there are a lot of widows that have not been paid. For reasons unknown to us, their issue has not been settled up till now. We need the process to be easier because it is too cumbersome. I don’t know if you’ve come across a notification on social media calling for verification for sponsorship of children of deceased soldiers. To partake, it means I’ll have to travel all the way to Abuja to present papers that I can send through mail. I’ll have to spend money to transport myself, money that can be used for the school fees of my children. What about the risk on the journey? Also, one would have to secure a place to stay in Abuja, if coming from Lagos or Enugu. Hotel bills in Abuja are scary. Where will I get the money from?

“I think it will be good to make use of technology because it will ensure the safety of the widows. I’ll suggest that some of the policies guiding the collection of entitlement for widows of deceased military officers should be reviewed. We all know the state of the economy.”

Dalaky, however, blamed ignorance on the part of some widows as the reason why their entitlement has not been paid by the government.

“Some widows are disqualified for some reason. Sometimes widows are ignorant of the entire process. When I lost my husband on the battlefield in 2013, someone was calling me to give an update on what I was entitled to. The person also ensured to know how far I had gone in the process to get my entitlement. So, I think there should be something like that to enlighten people about the process. A lot of times, we see that emblems are launched for the Armed Forces Remembrance Day, stating that the proceeds go to the family of the slain heroes. Well, we don’t know where it goes to. I’ve met people who say the emblems will take care of the family of slain heroes, but we don’t see it coming to us. There are several issues that must be looked into,” she submitted.

Captain A.I Omidele was killed in January 2015 during a fierce battle with Boko Haram terrorists in Baga, Borno State.

While his entitlement was paid to his widow, Mujidat, his life insurance has since been held on to, even eight years after his demise.

Mujidat said, “They have paid the entitlements of my husband, but the problem is the life insurance. It has not been paid since my husband died. I have made several efforts but nothing has been done. I called and sent a series of messages, but they said they were working on it. And that has been close to eight years now. I used to stay in the barracks in Lagos, but I have to relocate to Abeokuta where I currently stay.”

Reginal AbdulRazaq shares a similar story. Like others, her husband too was killed by Boko Haram in 2013 in Maiduguri, Borno State.

Ten years after, she said her dead husband left nothing for her except four children.

Narrating her pitiable plight,  Reginal said, “My husband was in the counter-terrorists unit and died in Maiduguri in 2013. Two children are at home due to a lack of finance. The other two are still going to school and the schools are asking for money. It was the money the state governor, Dapo Abiodun gave us that we shared among 32 widows. I got N35,000 out of N1 million and I added it to some money to pay the school fees.”

Asked what she wanted from the government, AbdulRazaq said “we want the government to empower us. We don’t want them to be giving us money every year.

“Last year, we got N21,000 from the money the government gave us. This year, we shared N1 million and I got N35,000. They asked us to come to Abuja today, the transport is too much, but I have to look for it, she bemoaned.

Another widow, but who craved anonymity, explained that her husband died in 2014 after a brief illness while serving at Two Division, Ibadan, Oyo State.

The mother of four, who is based in Delta State also confirmed the payment of her husband’s entitlement. She however noted that the payment was nothing compared to the life insurance that had yet to be paid.

Efforts to get the reaction of the Director of Army Public Relations, Brigadier General Onyema Nwachukwu, proved abortive as he didn’t respond to the calls and text messages put across to his phone.

But a 32-year-old widow, Mrs. Oluwasegun Adebayo, whose husband, a policeman, was killed by armed robbers during a bank robbery at Ilawe Ekiti in May 2018, said that life had been miserable since then.

Adebayo said, “In terms of his entitlements, we don’t know what to do because they (police) are not processing it from Abuja. I hope the police can really help us to get it. It is over four-and-half years now and we have not seen anything.

“Life has been miserable because it is not as if my husband saved money somewhere for us. His salary was stopped immediately.

“It has not been easy taking care of the children. Right now, I am struggling for assistance to pay the children’s school fees.

“I wish Ekiti State Government can help with empowerment or job to take care of the children.

“I always cry and wish I was the one that died. He would have been alive because he had a job and would have money to take care of the children, unlike me that is jobless,” the widow cried out.

Military pensioners and their families in September 2022, staged a protest march at the headquarters of the Ministry of Defence, Abuja over non-payment of their Security Debarment Allowance (SDA) among other demands.

When contacted for clarification on what was causing delays with families of deceased policemen and officers, who died in active service from accessing their entitlements, Police Public Relations Officer for Zone XI Headquarters, Osogbo, Benjamin Ayeni,  said delays, may at times are caused by families who may not come forward to process the money.

“Not that somebody will just sit somewhere and expect money to come. We must know those people and they must be able to bring one proof or the other to show that they are relatives or family.

“It (delay) happens, sometimes where the families won’t show up on time because some people don’t have information about what to do when their family member dies. But when they come later, whatever is available for them will be given,” the top cop clarified.

DAYO OYEWO writes on the plights of widows of soldiers and policemen, whose husbands fell in active service.