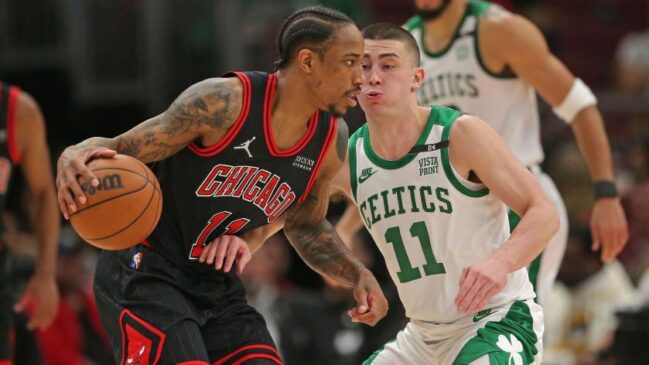 With the regular season in the books, four teams from each conference will now fight for the final two playoff spots in the play-in tournament beginning April 12-15.

The Brooklyn Nets, Cleveland Cavaliers, Atlanta Hawks and Charlotte Hornets will be going at it in the Eastern Conference while the Minnesota Timberwolves, Los Angeles Clippers, New Orleans Pelicans and San Antonio Spurs are the squads competing in the Western Conference.

The stakes are high, but which teams in the tournament have the best chance of making noise in the postseason? Let’s rank them to find out: It’s time to finalize the 2022 NBA playoff bracket. How do the Eastern Conference play-in teams rank?

The Nets had the top overall spot in the East during the early months of the season, but an 11-game losing streak from late January to mid-February derailed their momentum. Kevin Durant at the time was sidelined with a knee sprain while James Harden and Kyrie Irving were both in and out of the lineup. Suffice to say Brooklyn should not be here, but the unfortunate reality says otherwise.

And that’s what makes Brooklyn the scariest play-in team in the East. No one wants to have to beat Durant, Irving and possibly Ben Simmons four times in one series, presuming Brooklyn clinches a postseason spot. The Nets have the stars (Durant, Irving, Simmons), shooters (Seth Curry, Patty Mills) and skilled role players (Bruce Brown, Goran Dragic, LaMarcus Aldridge, Nicolas Claxton, Andre Drummond) to make some noise. The challenge will be health and putting everything together at the right time.

The Cavaliers also don’t quite belong here. Cleveland blew away all expectations after flirting with a top-3 seed for most of the season. However, once injuries started taking their toll and the sudden emergence of the Boston Celtics and Toronto Raptors, the Cavaliers, unfortunately, became the team that fell out of the top-6 safety net, which allowed Brooklyn to grab the No. 7 seed late in the year.

If the Cavaliers have a healthy Jarrett Allen in the lineup to pair with Evan Mobley, it’ll be a difficult matchup for any opponent. Darius Garland has taken a huge leap this season with an All-Star nod to pair with it, while Caris LeVert (secondary creator), Kevin Love (ball-moving, 38% 3-point shooting big man), Lauri Markkanen (7-foot floor spacer), Isaac Okoro (developing two-way wing) and Cedi Osman (scoring wing) have all sustained strong seasons. Maybe Playoff Rajon Rondo has another run in the tank, too.

The Hawks had high expectations this season after going to the Eastern Conference Finals last year as a No. 5 seed, which included upsetting the No. 1 Philadelphia 76ers. But, for whatever reason, this Atlanta team that looks tough on paper has struggled to translate that into wins on the court despite Trae Young having another brilliant campaign.

With Ice Trae leading the way, the Hawks have a similar group from last year that could make another deep run possible. Lou Williams’ streaky shooting could help win a playoff game. Bogdan Bogdanovic and Kevin Huerter are two ball-handling wings that can make it rain from deep. Delon Wright, De’Andre Hunter and Timothe Luwawu-Cabarrot are resilient two-way wings that can turn it up on defense. John Collins (if available), Danilo Gallinari and Gorgui Dieng provide floor spacing in the frontcourt while Clint Capela and Onyeka Okongwu are the traditional rim protectors.

The Hawks have a deep team on paper, but with no obvious stars besides Young, it’ll be about elevating their play as a unit if they can grab hold of a playoff spot. There’s a case to be made for Atlanta to take the No. 8 seed from Cleveland.

The Hornets made the 2021 tournament as the No. 10 seed but got drubbed 144-117 against the Indiana Pacers in the first game. They’re in a similar position this year – a talented young team but not better than the surrounding opposition.

LaMelo Ball and Most Improved Player of the Year candidate Miles Bridges have led the way for Charlotte, while Terry Rozier (secondary creator), Kelly Oubre Jr. (scoring wing), Montrezl Harrell (energy big) and P.J. Washington (floor-spacing big man) have helped out on and off the bench. The main concern, however, is the absence of Gordon Hayward. He will not be available to play in the tournament, hampering Charlotte’s chances.

If they’re able to get a glimpse of postseason life similar to the Memphis Grizzlies last year, maybe that will help Charlotte in the long run.

How do the Western Conference play-in teams rank?

The Clippers would not be in this position had Kawhi Leonard and Paul George been healthy for a good chunk of this season, and that’s not counting the injuries to players like Norman Powell. Despite all that, the Clippers weathered the storm to put themselves in a position to compete at this stage of the season. Head coach Tyronn Lue and the team have shown tremendous resilience.

With George and Powell back in the fold, Reggie Jackson, Marcus Morris Sr., Luke Kennard, Terance Mann, Nicolas Batum, Robert Covington and Amir Coffey will give any team fits. Los Angeles stocked up on skilled two-way wings ranging from 6-foot-5 to 6-foot-9, and facing that in the playoffs is not an easy task. If the Clippers make the playoffs and Leonard is able to return, watch out. They will be a top-3 quality team at the bottom of the bracket.

Anthony Edwards’ emergence in his sophomore season has definitely helped lift the Timberwolves into a potential playoff spot – which would be just their second berth since the 2004-05 season – but acquiring elite role players like Patrick Beverley also changed the team’s culture.

Karl-Anthony Towns is Minnesota’s do-it-all All-Star center, while D’Angelo Russell and Malik Beasley can catch fire on any given night to drown a team with buckets. Jaden McDaniels and Jarred Vanderbilt are two lengthy wings that can match up with anyone. The Wolves might be one legit piece away from making a deep run, but they won’t go out without a tough fight.

Gaining CJ McCollum from the Portland Trail Blazers changed the Pelicans’ trajectory this season. McCollum is averaging 25.2 points per game since arriving in New Orleans, supplying Brandon Ingram and Jonas Valanciunas with another bonafide scorer. If Zion Williamson were healthy, this is likely a team battling for the No. 4 or No. 5 seed, but that’s not the case just yet.

Herbert Jones is another player to watch for. The No. 35 overall pick in the 2021 draft has cemented himself as one of the NBA’s most versatile defenders this season as he continues to grow offensively. Devonte’ Graham is a player who can catch fire at any moment, but his shooting will need to be more efficient (36% overall, 34.2% from 3) to give the Pelicans a better chance.

The Spurs weren’t supposed to be here, but the downfall of the Los Angeles Lakers bumped San Antonio into the final spot. Dejounte Murray, 2022 All-Star, flirted with a triple-double average of 21.2 points, 9.3 assists and 8.4 rebounds. Keldon Johnson continues to grow in his third season after impressing throughout his sophomore campaign, but the Spurs just don’t have the depth, particularly in the frontcourt, to compete.

Doug McDermott, a 6-foot-8, 225-pound small forward, has played 97% of his minutes at the 4 spots this season, which is a career-high. However, he’s out for the season with a Grade 3 ankle sprain, putting more pressure on San Antonio’s already short bench. Zach Collins is back after a lengthy absence, but he doesn’t move the needle that much alongside Jakob Poeltl.