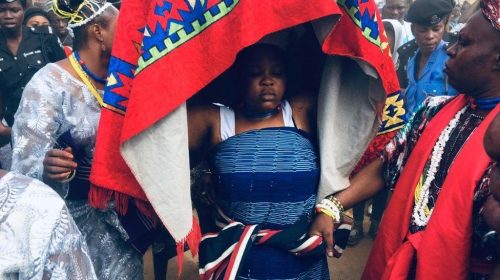 The virgin, Arugba covered in thick red and blue veil

Nigeria has many festivals some of which date back to the period before the arrival of the major religions. Annually, the country celebrates many cultural festivals, most of which are marked in ways that are unique to the various ethnic groups.

Osun Osogbo is one of those festivals, a traditional celebration that is believed to be over 600 years old. Celebrated for two weeks, this festival attracts a unique blend of traditional Yoruba worshippers and spectators from Nigeria and around the globe. This festival is one of the biggest annual traditional religious festivals of the Yoruba people. According to a U.S based tourist, Jackie Lage identified the “good energy and spirituality involved in the festival” as what would make her return for the event next year. 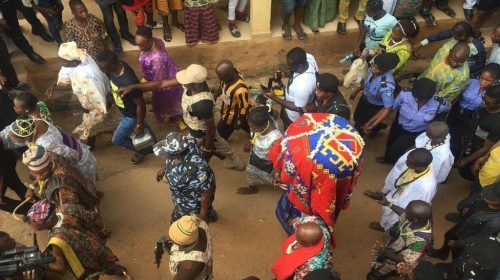 For the worshipers of Osun Osogbo deity within Osogbo, Osun State, Nigeria, and the Diaspora, the 2019 festival with the theme, “One Tradition, One Heritage and One cultural fiesta”, which grand finale came to a sensational conclusion recently, was one that would linger in the memory for a long time to come.

Some experts in traditional religion say the festival was birthed as a result of the failed attempt by the founders of Osun Osogbo to build their house along the river bank. Their failure was hindered by the river-god Osun, who called them out as they began felling trees. The site was recognized by UNESCO as a World Heritage Site in 2003.

It is believed that the sacred grove forest situated on the outskirts of the city of Osogbo is one of the last remaining places the sprits or “Orishas” reveal themselves to bless people. This prompts devotees to sing, dance and play the drums to appease the goddess of fertility. The Yoruba and Ifa of Nigeria have a number of deities in their traditional religion. These deities include Osun, who presides over love, intimacy, beauty, wealth and diplomacy. 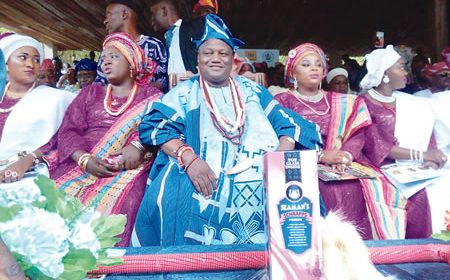 It was believed the claim by some callers to the groove of appearance of a mermaid which was last seen seven years ago, a claim corroborated by the Ataoja of Osogbo, Oba Jimoh Olanipekun and some Osun devotees.

However, the climax was the grand entry of the Arugba, a girl who must be a virgin, into the groove, with the crowd trying to outdo each other to catch her glimpse, while praying to the Osun goddess, for what they want her to do for them.

The virgin Arugba is the patron saint of the Osun River that was named after her. Her worshippers converge at the Osun-Osogbo grove where her principal sanctuary is located and where an eponymous festival is held every August.

She is the liaison between the people and the deity who leads devotees intending to offer sacrifices to the river. Known as the ‘calabash carrier’, Arugba carries a large calabash on her head which contains the sacrifice of the entire community as well as those who attend the festival. Due to the sensitive nature of this role, every Arugba has to remain a virgin before and during her time in the role. Just before all the worshippers move to the river for the processions, some of them offer a significant amount of prayers at the priestess’ shrine. 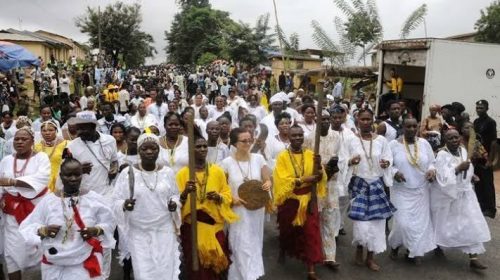 Governor Gboyega Oyetola of Osun State assured that his administration will support the development and promotion of Osun Osogbo festival to enhance its tourism potentials and sustainability, stating that the state was seeking partnership with the federal government to optimally tap into the tourism benefits that the festival provides.

Oyetola who was represented by the Supervisor of the Ministry of Culture and Tourism, Dr. Babawale Adebisi, said he was honoured to attend the festival for the first time, disclosing that the festival was important to his government and his administration intends to transform the annual event to a foreign exchange earner for the state.

According to him, “the festival is a bond between Osun the river goddess and the people in need and the lesson in this festival is faithfulness which we need to imbibe for peace and development of the state. The Osun-Osogbo festival is important to the government and people of Osun as it is a common cultural heritage and our window and voice to the world. We are aware of the power of tourism to market our culture to the world, foster cultural communication and harmony and engender national and international peace and cooperation.

“This festival has blossomed into an international event witnessed by about a million tourists all over the world. It is our intention to develop, promote and project the Osun-Osogbo festival to global prominence to compete with other world-renowned cultural festivals. We shall transform the festival to a foreign exchange earner and a major driver of our economy through tourism.

“This festival is very important to the government and the people of Osun as it is our cultural heritage and remains the most popular and the most recognized by UNESCO. The government has done the renovation of the groove and we are constructing a car park to conform with the UNESCO standard. We urged our indigenes in diaspora to partner with the government to promote and project the festival for global recognition.”

The governor then congratulated the custodian of the festival, the Ataoja of Osogbo, Oba Jimoh Olanipekun and the indigenes of Osogbo for the successful hosting of this year’s festival.

Speaking, Ataoja of Osogbo, Oba Jimoh Olaonipekun dispelled the rumour that he had sold the Osun-Osogbo deity, attributing the ugly trend to mischief being orchestrated by his enemies. He thanked all the partners and sponsors, who made the festival a success as well as dignitaries, royal fathers, and people, both from Nigeria and abroad, who participated in the cultural event.

The monarch as the chief custodian of the festival went down memory lane to tell the story of how Osogbo, as a town and city, was established and how the first king was the first Osun deity worshipper.

Mr. Toye Arulogun, Managing Consultant, Osun Osogbo Festival in his speech said, “The festival worked in accordance to its theme of One Tradition, One Heritage and One cultural fiesta as people came from around the world to participate in the festival. The crowd was enormous and our crowd control mechanism worked perfectly. We are going to improve on this edition. You will see that the tradition has not been distorted despite the innovations of communicating to the global audience which led to many foreigners participating in the festival.

“We introduced the Walk for Osun to sensitise the people about the festival and it worked as people from across the country and diaspora came to participate en masse due to effective and efficient communication. We also had effective engagement with the stakeholders, sponsors, partners and the people of Osogbo. We can all see that tourism has viable economy potentials. However, we need improvement in the area of infrastructure and security. We are going to improve on this edition and making the festival more attractive and economy spinning. We thank all our sponsors and partners for their support.”

#LekkiMassare: DJ Switch In Canada ‘They Have Been After My Life’- She Says