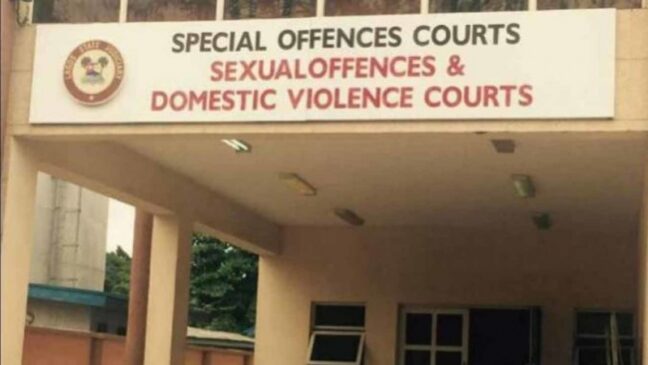 A medical doctor, Dr OyedejiAlagbe, on Wednesday told an Ikeja Sexual Offences and Domestic Violence Court how a man, Opeyemi Olasehan, allegedly fingered a 10-year-old girl inside a commercial bus.

The report has that Alagbe, a consultant at the Mirabel Centre (a sexual assault referral centre) has 18 years of working experience at the Lagos University Teaching Hospital (LASUTH), Ikeja.

He works at the Department of Family Medicine in the hospital and had handled hundreds of cases out of over 7,000 sexual assault cases recorded at Mirabel Centre.

While being led in evidence by the State Prosecutor, Ms A. R. Abolade, the medical doctor said he was before the court to interpret the survivor’s medical report on how she was allegedly fingered by the defendant in a commercial bus on her way to school.

“The survivor presented herself to the Mirabel Medical Centre on Dec. 2, 2019, and gave a brief account that she was on her way to school on the same day and boarded a bus.

“She said a man on the bus volunteered to lap her to save cost. Coincidentally, she said a teacher from her school was also on the bus.

“Along the way, she said she suddenly screamed aloud and when she was asked what happened, she said the man tried to finger her. So, the bus was diverted to a nearby police station.

“The survivor also declared that she had suffered repeated pain in her vagina having been raped by one Khalid, who is the son of her father’s landlord,” he said.

The witness, who said that the father of the survivor also corroborated the report that was disclosed to him, noted that he observed the survivor physically and carried out a genital examination on her.

“The labia minora had a fresh and resolving bruised surface. The general body of her inner vagina was also reddened.

“It had no natural covering called hymen hence the vagina canal was visible and red. I went further to examine the anus but there was nothing abnormal.

“The genital findings show recent and previous forceful blunt penetration into the vagina which could have resulted from repeated forceful vagina intercourse.

“Examples of blunt forceful objects can be likened to penis, fingers, candles, cucumber or any other smooth surface object.

“I managed the survivor medically after the examination by giving her drugs and forwarded the report to the administrative unit of Mirabel,” he said.

In a cross-examination by the defence counsel, Mrs R. O. Owolabi, the witness said that the survivor did not give an account if her pant was removed on the bus.

He noted that his report was not to indict anyone as he had never come across the defendant.

“You said the survivor raised the alarm; could it be that she was being triggered by what happened to her in the past?” Owolabi asked.

“Opinion wise My Lord, there is a possibility. The survivor never said the defendant defiled her. She only said he fingered her,” the witness replied.

Justice AbiolaSoladoye adjourned the case until June 13 for the continuation of trial. (Text, excluding headline: NAN)