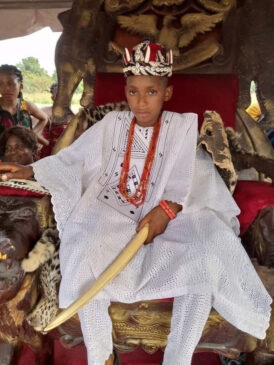 His Royal Highness Oyeachonam Okonkwo, 10, has become the youngest king in Igboland after he was crowned following his father’s death.

His father, Igwe Akuebisi, the Olame 1 Of Iyiora Anam. Anambra state was buried in December 2020 and the boy was crowned on Thursday, January 7, 2021

The 10-year-old boy has been crowned as king of Iyiora Anam kingdom in Anambra West Local Government Area of Nigeria’s Anambra State.

According to Waka About Africa,  Akubuisi Okonkwo ascended the throne after the last Ofala of his late father, His Royal Highness, Igwe Onyeachonam Okonkwo, the Olame 1 of Iyiora Anam.

It is reported that the young king’s father was also the youngest king at the time he ascended the throne and ruled throughout his life before passing away.

Having taken over the mantle from his late father, the youngest king is now the Olanme11 of Iyiora Anam and will rule the kingdom of Iyiora though out his lifetime, reports say.

As it is the tradition, Akubuisi Okonkwo will henceforth be addressed as His Royal Highness (Igwe) Olanme ii of Iyiora.

Following his crowning, the community of Iyiora Anam has congratulated him as they have already started addressing him as a king.

News about the young king has triggered reactions with some people wondering if he will be able to handle the responsibilities of his new position. Well, there will definitely be elders and members of his council who will groom him.

ArmedForcesRemembranceDay: Nigerians Sends Out Messages Of Love In Honour Of Servicemen Of The Nigerian Armed Forces.

She get di news while she bin dey NYSC camp and na proof say dreams dey come true as she bin dey determined to get first class and work...
View on Facebook
· Share

Heirs Holdings’ strategy of creating the leading integrated energy business in Africa is executed through a series of strategic portfolio...
View on Facebook
· Share

The Minister gave the definitive re-opening date during an inspection of repair work on major roads and bridges in Lagos...
View on Facebook
· Share

ArmedForcesRemembranceDay: Nigerians Sends Out Messages Of Love In Honour Of Servicemen Of The Nigerian Armed Forces. | Waka About Africa

Nigerians have taken to social media to honor both fallen heroes and those who are still giving their all to ensure that the walls...
View on Facebook
· Share